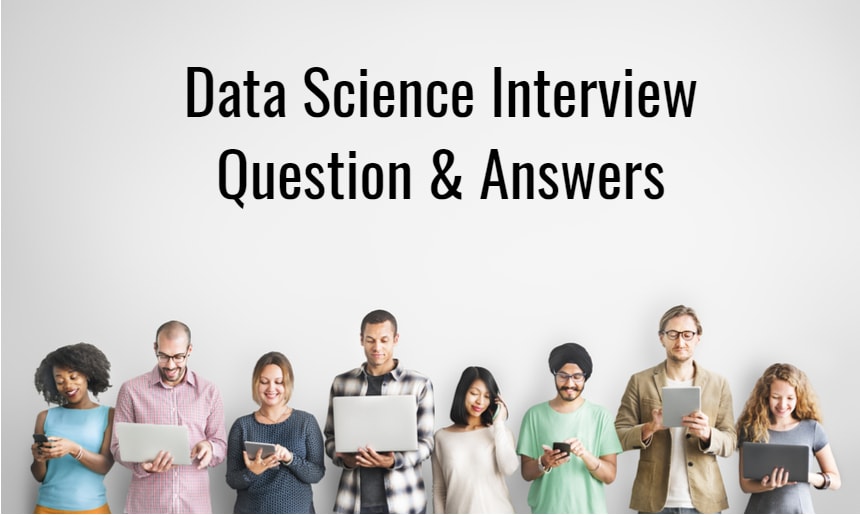 Python is the answer as it has libraries like pandas which provide easy data structures and high-performance for data analysis.

Question 28 - What is the advantage of performing dimensionality reduction before fitting an SVM?
Answer -  Support Vector Machine (SVM) algorithm actually performs better in a reduced space. It is beneficial as it performs dimensionality reduction before you fit an SVM as the number of features are large when you compare it to the number of observations.

Question 29 - Explain cross-validation.
Answer - Cross-validation is a model validation technique which helps in evaluating how the outcomes of a statistical analysis can generalize the independent data set. It is mostly used in the backgrounds where one can forecast the objective and estimate how the models accurately behaving to accomplish the results. The ultimate goal of the cross-validation is to terminate the data-set to test the model in the entire training phase. In order to limit the problems like overfitting and to gain insight into how the model is going to generalize to an independent data set.

Question 31 -  What are the differences between overfitting and underfitting?
Answer - In statistical machine learning, the most common task is to either fir the model to a training data set in order to make predictions on a general untrained data.

Question 33 - What are essential skills and training needed in Data Science?
Answer - The essential skills and training that one needs in Data science is to learn to Communicate Storytelling, Learning Optimization in Statistical Machine Learning, Computing with Big Data cloud, Having the knowledge about the business domain, to be able to visualize with the help of tools and to have a programming idea about the fundamentals of computing.

Question 35 - What does Machine Learning mean for the Future of Data Science?
Answer - Data Science includes Machine Learning. Machine learning is the ability of a machine to gather the knowledge from the data that is provided which it learns from. But there are few machines which can also learn without the data. The data science is pushing forward to increase the importance of machine learning. This is being used in various industries and soon will be used by all. Machine learning is efficient as it stores the data which has the ability to take the algorithms. It is a standard need for data scientists in all their fields that they are working on.

Question 36 - What is meant by logistic regression?
Answer - Logistic regression is a method to fit the regression curve that is y = f(x) where the y is a categorical variable. It is a classification of the algorithm. It is just used for predicting the binary outcome which is either 1/0, Yes/No, True/False with the given set of independent variables. It helps in representing either the binary or the categorical outcome. It is a regression model in which the response of the variable is categorical such as True or False or 0/1. This essentially means that it measures that probability of the binary response.

To perform logistic regression, we use this command in R: glm( response ~ explanantory_variables , family=binomial)

To perform logistic regression in R, we use the command:  glm( response ~ explanantory_variables , family=poisson)

Question 38 - What are distance measures in R statistics?
Answer - Distance measures - Similarity, dissimilarity, and correlation. It is a mathematical approach which helps us in measuring the distance between two objects which is further used as a commuting distance in order to compare the objects. This can be concluded in three different points which are based on the comparison which are:

Question 39 - What is a correlation in R?
Answer - It is a type of technique which is used for investigating the relationship which is between two quantitative and continuous variables.

Question 40 - What is term Pearson’s Correlation Coefficient?
Answer - This is actually a statistical technique which provides with a number that tells us how a strong and weak relationship is between the objects. Basically, it is not a measure that describes the distance. The measure actually describes the bound between the two objects. It is represented by "r" and it ranges from -1 and +1.