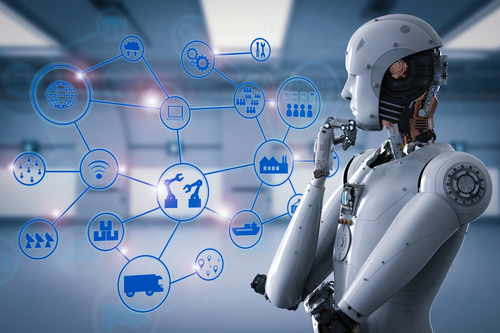 Robots are getting smarter day by day and may soon be doing a lot of work for us. They will soon be driving the cars for us, lifting our bags, cook meals and perform various other tasks. Robots have taken over the recent discussion on its evolution in the recent years. But are robots going to define our future? That is exciting and sometimes scary. We do not have a definite answer to that question but we can say maybe some part of our lives will be affected by the evolution of robots. Although that does not mean that we will see them walking around in the streets. Robots do not yet have the ability to see into the future. Now we do not know what really can happen in the distant future but let us first find out what does seeing actually means.

We all know that our eyes collect the light which reflects the objects around us. The light is converted into electric signals by our eyes and then sent to the optic nerves which are processed by our brain immediately. Our brain figures out what all is around are and build it up from our past experiences. We use it to navigate through and do a million tasks. This whole activity to having an understanding of the world around us is what seeing means. This form of seeing can be achieved slowly by the evolution.

Robot vision
Robotics research has predicted that robots can see the future, and if they do that would be a boom in this field and help people get what they always have been desiring of. But how will a robot look at the future? Well, first a video camera is used just like it is used in your smartphone, which collects a series of photographs. After that, the images are transferred to the computer where we observe the data. Since 1970, robot engineers have been figuring about what the textures mean, what the interesting lines in the photos reveal and by writing algorithms, they try to track the images from frame to frame. The software is written to recognize the patterns to help the robot understand what exactly it is seeing around.

Using the Visual Foresight technology, the robots can predict what the camera is looking at by gathering the information derived from the sequence of movements. The predictions are just several seconds into the future and it's very simple as of now. But for now, robots are capable of moving objects without creating any obstacles and can perform a number of tasks without having any knowledge about its environments or objects. Visual imagination is basically learned from scratch from unattended exploration, where the robot actually interacts with the object on the table. But after this phase, the robots are capable of creating a predictive model of the world where it can manipulate the new objects which it has never seen before.

In this way we can imagine that soon our actions will be moving the objects in the environment, this will enable the robots to visualize the different types of behaviors. This will help in the intelligent planning of the flexible skills which will be of great use in the complex world. The deep learning technology which is based on the convolution recurrent video prediction or DNA is what is at the core of this system. These models help in predicting the movement of the pixels in the image which goes from one frame to the next.

The future is unknown and we cannot say if robots will be able to see the future but the evolution one day might lead to it but not just right now.